An article published in the Journal of Cosmology last month made headlines with its bold claim: alien life can be found in Earth’s atmosphere. The rest of the scientific community ins’t convinced. The Journal of Cosmology isn’t a “peer reviewed” journal, which is the gold standard for scientific work. This means papers the journal publishes aren’t really evaluated for quality or accuracy. In fact, it’s even been labelled “predatory” by one research librarian. As a general rule, it’s also really not a good sign when a paper making a bold claim mainly cites other papers by its authors.

The lack of peer review on the paper seems justified; there’s not much data.  The paper relies almost entirely on just microscope images . Virtually any structure that has a bend or fiber is declared evidence of life, for no clear reason. (This may be a trend, as PZ Myers basically made the same complaint of a previous Journal of Cosmology paper claiming to have found bacteria in meteorites) 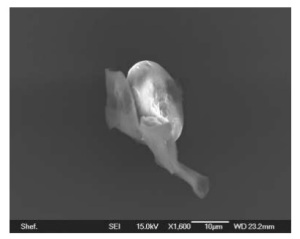 If you can see four living things in this post, I will give you a prize*

This paper claims the images are of diatoms or diatom-like lifeforms, but they don’t show any as reference and their images aren’t magnified like most that try to show diatom structures.

A known diatom from Earth.

The authors also try really hard to link the alleged cells they see to alleged organisms responsible for the red rains in Kerala, India several years ago (those claims inspired similar controversy and seemed to rely on evidence that was only slightly more firm than what is offered here). If you’re going to make that connection, though, maybe you should show an image of that.

Aside from images, the only other data the paper mentions is a technique to measure the amount of elements in the sample. The paper only says the samples are high in carbon and oxygen, but don’t provide numbers.  They say that means what they’re looking at isn’t a mineral, but it’s worth pointing out there are in fact many meteoroids that are mostly carbon and oxygen so they might be looking at weird dust from those. That’s it; no attempt to extract any potential organic matter (though that’s also a dime a dozen in space, even without life).

The people at the Journal of Cosmology say other scientists are irrationally opposed to the idea that life on Earth may have originally come from outer space. While that’s not the dominant opinion in biology right now, it actually is something mainstream scientists are looking at. It’s just that, as Carl Sagan said, “extraordinary claims require extraordinary evidence”. And a bad SEM image is not the latter.

*The prize is my affection.